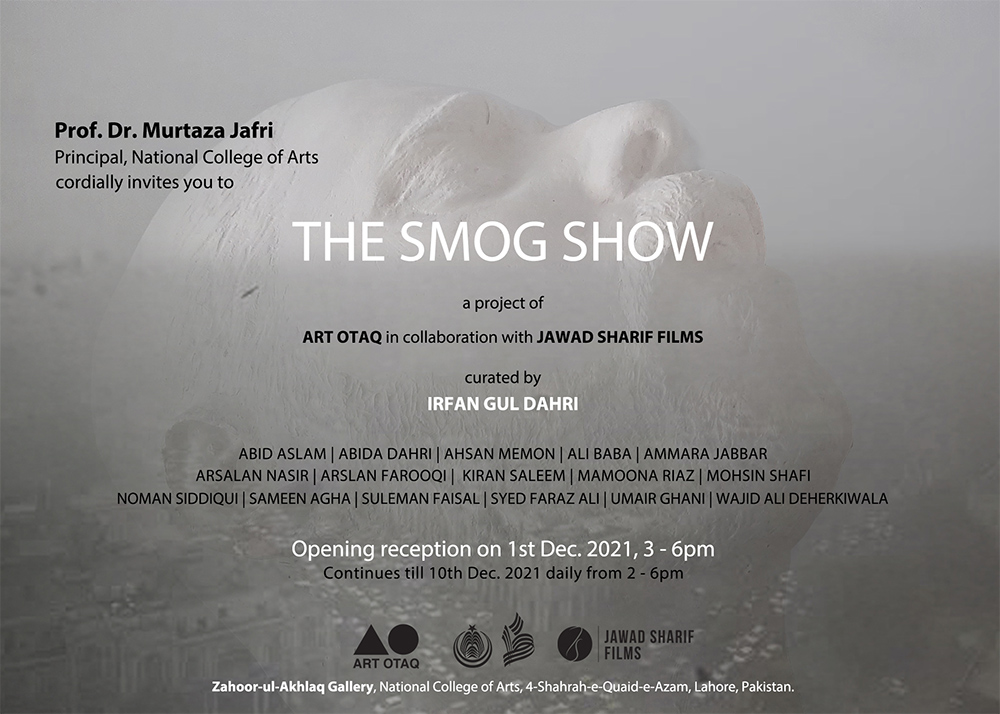 On 1st December, 2021, National College of Arts hosted an Exhibition “The Smog Show” curated by Irfan Gul Dahri (visual artist, educator and curator) in collaboration with Jawad Sharif (documentary filmmaker). Both of them are two accomplished professionals who decided to join hands and address the issue of Smog in Lahore through distinct mediums of art and public engagement. For this project, they engaged various multidisciplinary artists of Pakistan to reflect on the idea and also involved the school children to participate as they represent the future of our country. The whole activity then culminated in the form of an exhibition and a documentary film.

The show was inaugurated by Principal NCA, Prof. Dr. Murtaza Jafri who appreciated the efforts of the team in raising this sensitive issue. He said that this initiative was much needed to send a message of hope and to look for a way out for restoring the beauty of Lahore.

BRIEF DESCRIPTION OF THE PROJECT
A combination of fog and smoke is smog. This monster of air pollution reveals itself with its full strength and roams around in every street of Lahore ruthlessly affecting every living being. The dearly awaited winters of Lahore, its social and cultural fabric, its environment, its energy, everything is gradually losing its charm. What went wrong? This is the time to think and react!

Irfan Gul Dahri (visual artist, educator and curator) and Jawad Sharif (documentary film maker) are two accomplished professionals who decided to join hands and address the issue of Smog in Lahore through various mediums and expressions of art and public engagement. They invited various multidisciplinary artists of Pakistan to reflect on the idea and outreached to the schools for participation of young students who would be the torch-bearers of our future. The whole activity culminates in form of an exhibition and a documentary film.

There is a need of public awareness about the issue of smog and air pollution and since artists are generally more sensitive and responsive to reflect on social and environmental issues, we have brought various contemporary Pakistani artists together to work on the issue of smog in Lahore. These multidisciplinary artists have produced the artworks in form of painting, sculpture, installation, video, audio, photography and writing etc. to approach the audience through all possible sensory experiences and feel the severity of the issue and respond responsibly in their routine life choices. There is an immediate need to make laws/policy to control and reduce air pollution.