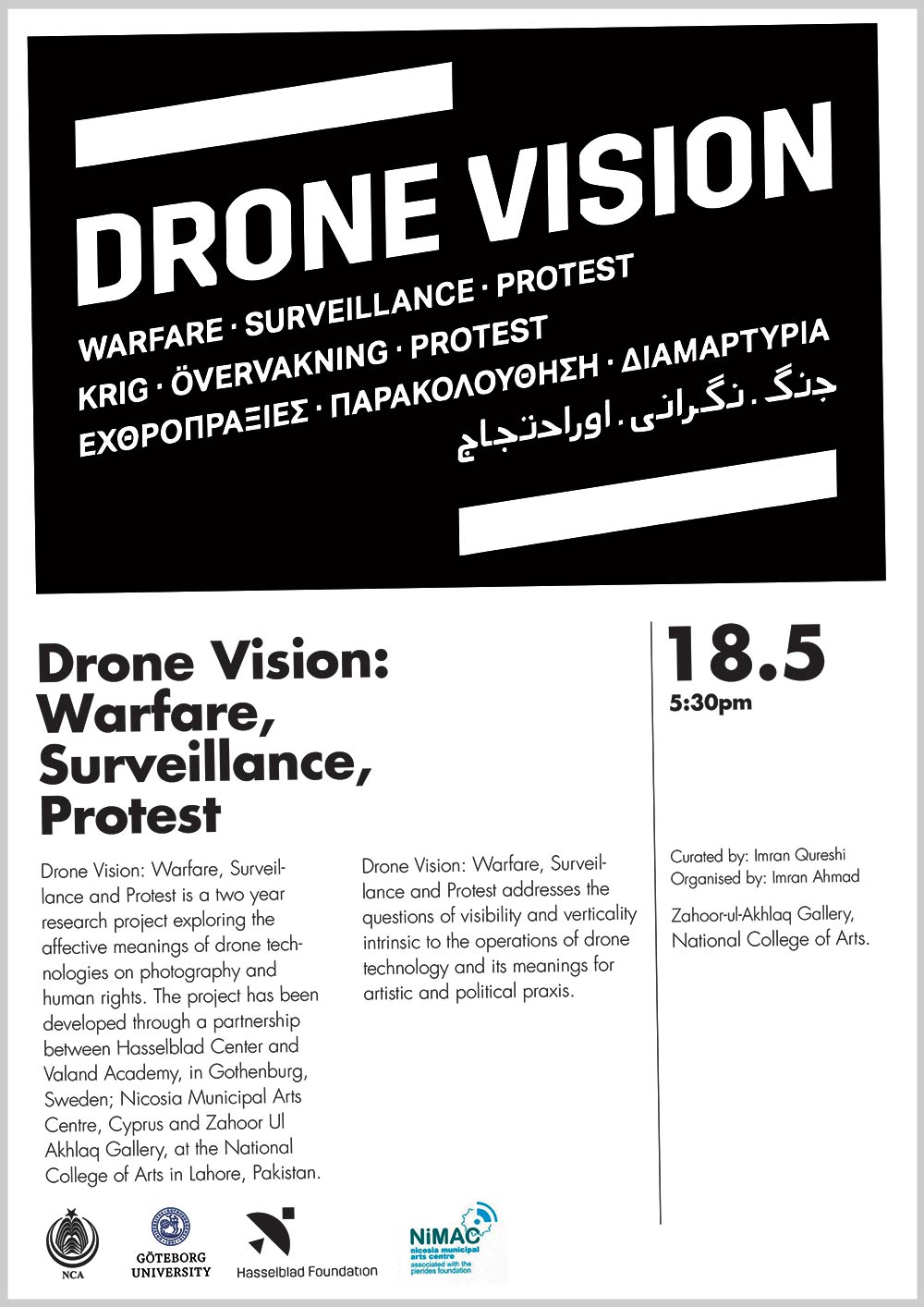 Drone Vision: Warfare, Surveillance and Protest addresses the questions of visibility and verticality intrinsic to the operations of drone technology and its meanings for artistic and political praxis.

For the exhibition at Zahoor Ul Akhlaq Gallery, National College of Arts in Lahore the commissioned artists Salman Khan, Wajahat Saeed and Sajid Khan have produced works that respond to the visual and material consequences of drone technologies in the context of Pakistan.

The three artists selected have all been affected by US led drone strikes and the use of drones as a technology of surveillance in Pakistan.

Salman Khan graduated from National College of Arts, Lahore in Miniature. Salman is from South Waziristan in FATA. Salman translates the violence of drone warfare in the layering technique of miniature painting as sediments of memory, grief and erasure.

Wajahat Saeed is a textile designer from Parachinar. He graduated from National College of Arts, Lahore in 2015. From the age of six Wajahat witnessed the impact of drones on FATA. He was forced to flee his hometown with hundreds of other families. His work examines the distress of those who survived and the grief for those who have been brutally killed. Sajid Khan graduated in Miniature painting from National College of Arts, Lahore in 2011. Originally from Malakand in KPK, Sajid has been involved in numerous exhibitions nationally and internationally. His work is from the perspective of those on the ground living under the threat of imminent death and how this alters a comprehension of the sky above. Part of a triptych of exhibitions with the partner galleries Hasselblad Center, Gothenburg and NiMAC, Nicosia Municipal Arts Centre in association with the Pierides Foundation the project is an endeavor to produce a ‘geography of thinking’ that makes apparent the differential meanings of seeing without being seen and of vulnerability and resistance. This network of partners is presented on three screens as the permitted view from above the cities Gothenburg, Nicosia and Lahore edited by artist Vicky Pericleous as well as in the shared audio plays of three international roundtables hosted in Gothenburg in 2017.

The exhibition at Zahoor Ul Akhlaq Gallery, National College of Arts in Lahore curated by Imran Qureshi and coordinated by Imran Ahmad and administrative support by Kanwal Tariq.

Drone Vision: Warfare, Surveillance and Protest is a collaborative initiative between Valand Academy, Gothenburg University and the Hasselblad Foundation. Led by Dr. Sarah Tuck the project examines how drone technologies alter the material assemblages through which warfare, surveillance and protest take place.