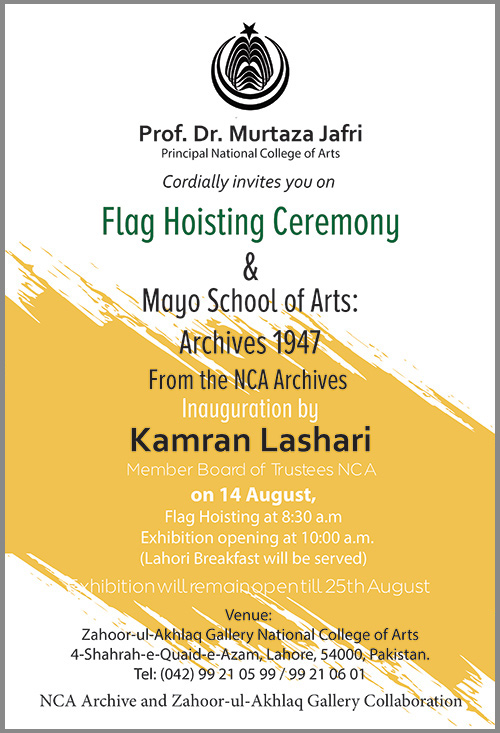 The National College of Arts celebrates Independence Day 2018 with a series of exhibitions featuring various aspects of the Partition.

Press Release for Gallery 1: The partition of the Indian subcontinent in 1947 has been much discussed, remembered and analyzed using various lenses. Narratives gleaned from several state archives and oral histories continue to bring forward new and interesting perspectives that shine a light on this complicated period in history – often quite different from simplified textbook versions that are still deeply embedded in the minds of many. This exhibition highlights August 1947 using a selection of papers from the institutional archive of the National College of Arts (NCA), formerly known as the Mayo School of Arts (MSA). While it aims to draw connections with the events and activities of the time, it also serves as a window into the workings of the MSA, and the various institutions and state departments that the school was working in close alliance with, both directly and indirectly. As such, it serves as a portrait – by no means complete or exhaustive – of the MSA from 1933 to 1949.

Parallel to the tumult – frantic requests for leaves, changes of duty, altered addresses, relief camps, and transfer notices of staff members from India to Pakistan or vice versa – one also catches a glimpse of the mundane or the everyday: crayon sampling requests, summer vacation circulars, orders for furniture items and anatomical models, the drafting of new syllabi, and later, preparations for a garden party, among other official matters.